Showing posts from November, 2006
Show all

Misconceptions on Imams and US Air

WASHINGTON, DC - Nov. 29, 2006 (MASNET) Listed below are important facts in responding to inaccuracies and misconceptions by some of the media concerning the six Imams removed from flight 300.

A note by a passenger given to the flight attendant stated that the Imams were saying "…Allah…Allah…" before boarding. According to both the Imams and passengers, three Imams were observed praying aloud in the terminal prior to boarding. The word Allahu-Akbar (God is Great) is recited aloud in Muslim prayers and is said a minimum of 20 times. Additionally, even in casual conversation the word Allah, which is Arabic for God, is used frequently. This is similar to the way Christians use in their conversation expressions such as "God-Willing", "Praise the Lord", and "Good God Almighty". Causal conversations among both Muslim and Christians make frequent reference to God (or Alla…
2 comments
Read more

Prayer Sit-In at US Airways

Imams, Airplanes, and my Grandmom

WASHINGTON, DC - Nov. 29, 2006 (MASNET) Below is a letter written by Rabbi Arthur Waskow of the Shalom Center of Philadelphia concerning the six Imams removed from US Airways flight 300 and Monday's interfaith "Pray-in".

If you've already seen this letter, I apologize for the double-posting. The "P.S." at the end, however, is new.

Last Monday, six imams on their way home from a conference of imams were forced off a US Airways flight in handcuffs because they had been praying before entering the plane. - Though they had gone through security and in every other way had satisfied every requirement, someone on the plane wrote a note to an attendant: Their presence made him or her uncomfortable.

Did US Airways invite the frightened passenger to choose a different flight?

No. Instead, they forced the imams off the plane in handcuffs, and even after checki…
Post a Comment
Read more

"Driving while black, flying while Muslim..."

- November 27, 2006
MAS Freedom Foundation Leads Interfaith Response to Air Travel Profiling Date Posted: Monday, November 27, 2006 In the Name of Allah, Most Gracious, Most Merciful<>FOR IMMEDIATE RELEASEContact:Mahdi Bray, MAS Freedom, (202) 496-1288Muslim, Jewish and Christian Clerics Condemn Discrimination Against Imams and Others at Press Conference at ReaganNationalAirport on November 27th.WASHINGTON, DC - Nov. 27, 2006 (MASNET) Speaking before a large national and international media audience near the U.S. Airways ticket counter at Reagan National Airport near the nation's capital, representative leaders from the Muslim, Jewish, and Christian communities spoke unanimously against the religious profiling and discrimination which lead last week to the expulsion of six leading Imams from a U.S. Airways Minneapolis-to-Phoenix flight.The Imams, who had previously gone through airport security screening, were pulled from the flight because another passenger had witnessed three of them performin…
Post a Comment
Read more

Thousands Protest Against Headscarf Ban in France Date Posted: Monday, December 22, 2003 Thousands of protestors demonstrated in Paris against President Jacques Chirac's announcement to ban the Islamic headscarf in public schools in France.PARIS, Dec 21 (MASNET & News Agencies) - Thousands of protesters, including many young women in Muslim headscarves (hijab), demonstrated on Sunday against the French government's plan to ban overt religious symbols in schools. The protest from a rarely heard section of French society was the first in Paris against President Jacques Chirac's announcement Wednesday that head scarves and other conspicuous religious symbols, including Jewish skullcaps and large Christian crosses, should be banned from schools to protect French secularism, reports the Associated Press (AP).The proposal has been welcomed by most local religious leaders, but has drawn the ire of Muslims at home and abroad, reports Reuters news agency.The predominantly Muslim…
Post a Comment
Read more

Lyrics to Sami Yusuf's Nasheed about Hijaab:
What goes through your mind?
As you sit there looking at me
Well I can tell from your looks
That you think I’m so oppressed
But I don’t need for you to liberate me

My head is not bare
And you can’t see my covered hair
So you sit there and you stare
And you judge me with your glare
You’re sure I’m in despair
But are you not aware
Under this scarf that I wear
I have feelings, and I do care

CHORUS:
So don’t you see?
That I’m truly free
This piece of scarf on me
I wear so proudly
To preserve my dignity...

For you I sing this song
My sister, may you always be strong
From you I’ve learnt so much
How you suffer so much
Yet you forgive those who laugh at you
You walk with no fear
Through the insults you hear
…
Post a Comment
Read more

What Sings to Your Heart? In Response to "Robotic Prayer" 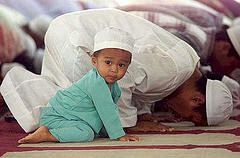 So we make music a part of our lives...sometimes we understand it...sometimes we don't...but the most important thing is...it's in our lives. I think this can be said about almost every young person on earth...yes - no? Someone can listen to orchestra music and have no idea what the music is really saying - yet love it all the same. This person can easily interpret what he/she is hearing and make it apply to his/her life...guess what folks...

If you want to understand something and get out of the routine mundane world you live in...you have to make things make sense. Prayer is something that anyone looking for answers does...prayer is something that we too cannot live without...prayer is the song of our hearts...even though we might not consciously believe it to be true. Our hearts and souls are thirsty for closeness to God - just as our whims and our lusts are thirsty for music.

We should see that both are comparable in that they drive the human spirit. The answer to how …
Post a Comment
Read more
More posts